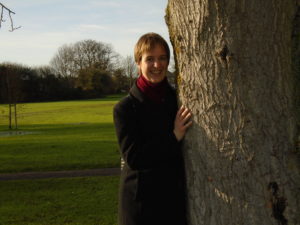 I come from Estonia.  As a child I studied piano at Tallinn Music High School. The standard of music teaching at this school is very high, and most of the students continue their studies to higher education and become professional musicians. I continued my piano studies at the Estonian Academy of Music and Theatre. I was supposed to graduate in spring 2000, but unfortunately I injured my arms in autumn 1999 and couldn’t subsequently play piano for two years.

As a child I was always told by my various piano teachers that I shouldn’t raise my shoulders or I should free my tight arms. It was much easier said than done: I just couldn’t play without tightening up. I was also very ambitious and wanted to be the best all the time, which isn’t a bad thing in itself.  However, the combination of ambitiousness and excessive muscle tension let to my injuries.

I had also injured my neck while doing yoga exercises, so suffered a lot of neck and shoulder pain, too.

After searching for help for a year I finally heard about a new class at the Estonian Academy of Music and Theatre in the Alexander technique. Quite soon I realised that this was what I had been looking for. In the lessons I got more relief in my neck pain than I had experienced in any massage session. I also realised that I had caused my own problems. I had to examine and change my whole lifestyle. I learned how to sit, walk, talk, play piano, etc., completely differently. My whole attitude towards life has changed. I am much healthier and happier in general.

While taking Alexander technique lessons and seeking to overcome my problems, I worked as a piano teacher in my old school, Tallinn Music High School.

And as my body freed up from undue tension patterns, I found that my understanding of music and piano playing was absolutely transformed. I found the whole process of piano playing much easier.

Also during my studies I suffered so much performance anxiety that when I was 16 I almost decided to give up piano playing because I could not handle any performance situations. But I struggled on. It was only when I had started my Alexander Technique lessons that I realised the link between my very tight body and performance anxiety. The freer my body became the calmer I became in general and I handled performing considerably better than before.

I moved back to Estonia in 2008. I went back to work at Tallinn Music High School as an AT teacher, as I was very much interested in the task of teaching young musicians how to prevent music-related injuries; I worked there for 7 years until summer 2015. I also worked at G.Ots Tallinn Music School from 2007-2015.

Alongside my practice as an Alexander Teacher I have continued teaching the piano privately.

In September 2015 I moved to England, to St Neots and currently am living in Yaxley, Peterborough.